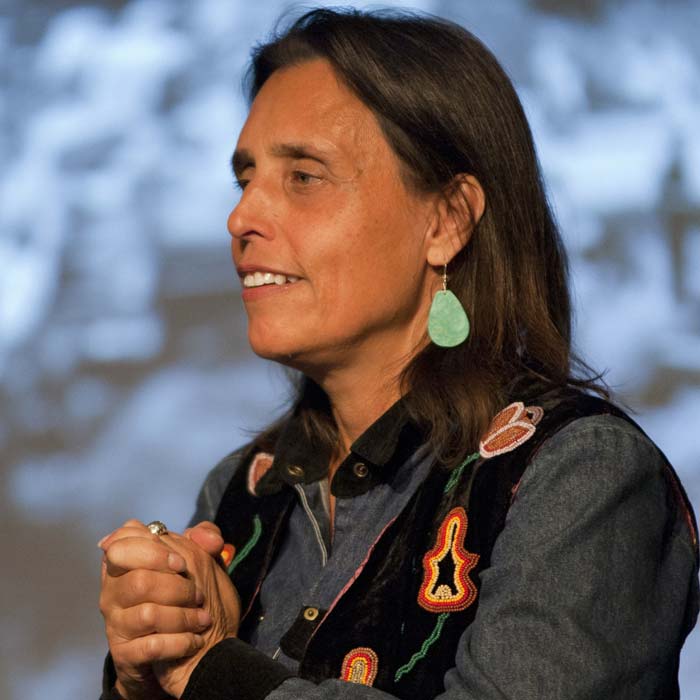 Winona LaDuke is an Anishinaabekwe (Ojibwe) enrolled member of the Mississippi Band Anishinaabeg who lives and works on the White Earth Reservations, and is the mother of three children. She is also the Executive Director of Honor the Earth, where she works on a national level to advocate, raise public support, and create funding for frontline native environmental groups.

In 1994, Winona was nominated by Time magazine as one of America’s fifty most promising leaders under forty years of age. She has been awarded the Thomas Merton Award in 1996, the BIHA Community Service Award in 1997, the Ann Bancroft Award for Women’s Leadership Fellowship, and the Reebok Human Rights Award, with which she began the White Earth Land Recovery Project.

A graduate of Harvard and Antioch Universities, Winona has written extensively on Native American and Environmental issues. She is a former board member of Greenpeace USA and serves, as co-chair of the Indigenous Women’s Network, a North American and Pacific indigenous women’s organization. In 1998, Ms. Magazine named her Woman of the Year for her work with Honor the Earth.

She has written extensively on Native American and environmental issues. Author of now six books, including The Militarization of Indian Country (2011), Recovering the Sacred: the Power of Naming and Claiming (2005), the non-fiction book All our Relations: Native Struggles for Land and Life (1999, South End Press), and a novel – Last Standing Woman (1997, Voyager Press).